As a whole, the Gordon Parks Exhibit was a masterpiece. Parks captured Muhammad Ali in different stages in his life, from the loud-mouthed, cocky, young boxer, to an evolving civil rights activist. Parks did an amazing job of portraying a side of the famous boxer the mainstream media didn’t want to show us. 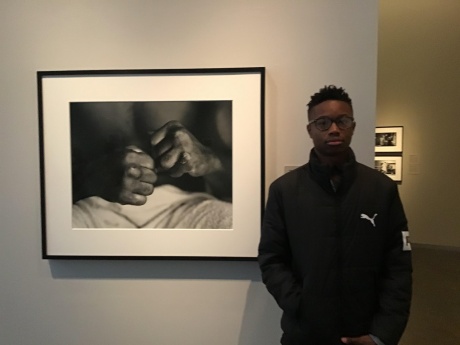 Daniel Owen standing in front of a photograph of Muhammad Ali featured in the Gordon Parks exhibit at the Nelson Atkins museum.

As I walked around the exhibit, this single picture stood out to me. Boxing is a brutal and physical tolling sport. Ali took a beating and suffered over his career.

This picture stuck out to me because Muhammad Ali, to me, was portrayed as this almost invincible and untouchable being. No one could hit him. So to see his knuckled, bruised and calloused; it showed me the real raw reality of Muhammad Ali. To me, Gordon Parks wanted to show the harsh, physical reality of boxing and the physical toll it can take on its athletes, even someone as seemingly invincible as the great Ali.