“What’s their problem?” a Rockhurst player asks a remaining member of the opposition in the handshake line.

“Maybe we’re just a little tired of your boys over there rubbing it in our face so much…Good game.”

The scenario is no farce. It is a reality many Rockhurst students face and can come in many more ways than just a boasting student section. While every perception of the school cannot be accounted for, a relatively common opinion is becoming more voiced, and it is that members of the Rockhurst community can appear elitist.

The concept of an elitist attitude is rooted in superiority. Characteristics of arrogance, boasting and exclusivity fall under the umbrella of this mindset. Claims of Rockhurst’s being an elitist school are becoming more prevalent. Rockhurst has locally established itself as an elite school, but one can only wonder if the perception has shifted from ‘elite’ to ‘elitist.’ 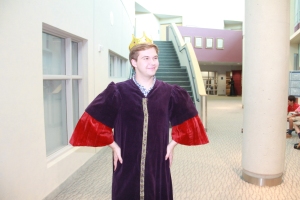 To understand this issue in its entirety, Mr. Greg Harkness, principal, noted the importance of first understanding the history behind this notion.

“The school has prestige… We have been here 100 years. We are founded and sponsored by religious orders who have been running schools since 1548,” Mr. Harkness said.

Not only does the longevity of Jesuit education breed a reputation of prestige, but the way in which Jesuit schools are run also contributes to this notion. “The Jesuit model demands our striving for more,” Principal Harkness said.

This model validates the school’s improving faculty and facilities. “We do these things to help our students do what we are asking them to do,” Mr. Harkness said.

The established excellence of Jesuit education predates Rockhurst, already providing a certain impression to some people, according to Mr. Harkness. “If you went outside of our region and told people you went to a Jesuit school, I think automatically they identify you as a certain type of person,” Mr. Harkness said.

Furthermore, this identification exists regardless of the students and faculty of Rockhurst, according to Mr. Chris Bosco, assistant principal of student affairs. “As a private school, it’s difficult not to have this perception.”

The aforementioned prestige of a Jesuit high school is very apparent at Rockhurst. The school’s geographical isolation furthers this notion. Being the only Jesuit high school in Kansas City, Rockhurst, for many, is the primary example of Jesuit education and its self-proclaimed prestige. “You can’t help but know we’re a really big fish in a little bowl,” Mr. Harkness said.

But Rockhurst students can overstep their boundaries when it comes to this ‘big fish’ mentality, often appearing to claim superiority over the other ‘fish in the bowl.’

While feigning ignorance regarding the school’s success is unrealistic, members of the Rockhurst community can easily turn their understanding into an elitist mindset, an overarching sense of superiority in several areas. Those associated with Rockhurst—not only students, but alumni, faculty and parents—are greatly responsible for the school’s reputation.

When a member of the Rockhurst community is seen boasting, acting superior or judgmental, he or she is said to be tarnishing the school’s reputation. Yet, it only takes so much of this degradation for these acts to become Rockhurst’s reputation. And for many, it already has.

Lee’s Summit North senior Thomas Senneff said his encounters with Rockhurst students have shaped his view of the school. “Rockhurst is an overpriced school with much less diversity than most schools,” Senneff said.

Senneff’s perception is a common one, but to people like Mr. Bosco, any misconception of Rockhurst is a concern of the school.

“If the impression someone has of our school doesn’t match the goals of our mission, that’s a problem,” Mr. Bosco said.

The views of Rockhurst from within greatly contrast a negative generalization of affluence.

“Rockhurst is a school with prolific racial, socioeconomic and religious diversity,” Director of Communications Mr. Robbie Haden said. “More than 40 percent of students receive some form of financial aid.”

To that end, Mr. Harkness commented on the economic realities of Rockhurst. “Seventy-three students this year would qualify for a free or reduced lunch if they were in public school,” Mr. Harkness said.

“Spending nearly $48,000 on high school is a sacrifice,” Mr. Harkness said. This sacrifice of four years of tuition is acknowledged by the school, specifically through the estimated 2.1 million dollars in financial aid allocated to the 2015-2016 school year. “Your finances are real,” Mr. Harkness said, “and it pains me how real they are.”

But statistics regarding the financial circumstances of Rockhurst students do not exactly solve the problem at hand. Simply countering the school’s perceived-elitism with humbling financial data does not diffuse the issue. Archbishop O’Hara High School senior Michael Drake said, “I mostly encounter Rockhurst’s elitist attitude on the club soccer field.”

“It’s known that sports are very important to most young men,” Mr. Harkness said. “As hard as we push you academically, we push you athletically.” This mindset has bred several championship teams and has established Rockhurst as a contender on the sports field.

However, in striving for athletic excellence, Rockhurst could face a difficult consequence of this success: disdain for the school as a whole. Many believe Rockhurst can appear more mindful of the scoreboard than of its reputation.

“Rockhurst guys are good guys. But when they feed off each other’s beliefs, they embody an elitist attitude; and it usually corrupts them,” another Archbishop O’Hara senior, CJ Naudet, said.

The combination of several winning programs and an active fan base can cause others’ views of Rockhurst to become negative. Large students sections are undoubtedly a great display of school spirit. However, as Naudet remarked, mass gatherings of Rockhurst students can change one’s perception from ‘good’ to ‘corrupted.’

Whether good or bad, the Rockhurst tendency to unify stems from the the school’s unique environment. Mr. Harkness noted the students’ awareness to this, saying, “You guys understand that the environment here is not what your friends have.”

The environment of Rockhurst is another area of shining achievement and great controversy. A key element of this unique environment, according to the administration, is confidence.

“We want students to be confident in their abilities; we really do,” Mr. Bosco said. “This helps them accept challenges they would otherwise shy away from.” The Rockhurst environment loudly exudes this confidence through its challenging curricular and extracurricular standards.

“This confidence can easily cross the line into arrogance, however,” Mr. Bosco said.

This overstepping of intended boundaries is fundamental to the concept of elitism. The line between ‘elite’ and ‘elitist’ is finely drawn here between confidence and arrogance. The elite status of Rockhurst exists beyond its members’ control. But the perception—or possible reality—of Rockhurst’s sense of superiority rests in the hands of every affiliate.

“I have seen some students believe they are great simply because they attend Rockhurst,” senior Daniel Henry said. The membership in an elite school like Rockhurst can easily breed this sense of greatness by association. It can create disillusioned ideas in a student, and again, can induce negative views of the school as a whole.

Henry continued, saying, “I firmly believe Rockhurst is a great place—a special place. And it’s easy to confuse a conviction like that for an elitist mindset. But it’s not about that. It’s simply about pride.” The importance of pride in the school, rather than in oneself, is imperative to the goals of Rockhurst.

Pride can act as either a virtue or a vice. A concrete example of this issue is the 2015-2016 Spirit Club t-shirt. On the back of the shirt, large letters read, “King of State Line.” The claim has raised question as to whether the shirt embodies a message counter to the school’s goals: an elitist message.

“We went against the title, ‘Kings of State Line’ in favor of ‘King of State Line.’ This minor change was made to combat the idea that each student is somehow superior—a king,” said Mr. Bosco, moderator of the school’s spirit club. The shirt design was finalized in the summer and distributed at each grade’s orientation.

Rockhurst’s effort to combat elitism is evident here. The importance placed upon one letter of a t-shirt shows how pensive the school is regarding its marketing decisions.

After explaining the club’s reasoning, Mr. Bosco addressed the still-lingering worries of the shirt’s message. He said, “This is a spirit shirt. Spirit is supposed to be about energy and confidence in the community.”

The Rockhurst community is seemingly always under examination, and at times, scrutiny. While conceding that Jesuit education lends itself to a troubling notion of elitism, Mr. Harkness stated the school’s goal amidst these claims and realities. He said, “I want Rockhurst to be a beacon of light, which welcomes everyone, as opposed to the blinding light on the hill.”

While the illumination of Rockhurst as an elite school welcomes some, it undoubtedly blinds others, causing them to turn their back on the school. There is much progress to be made as Rockhurst constantly adjusts the light of its perception.