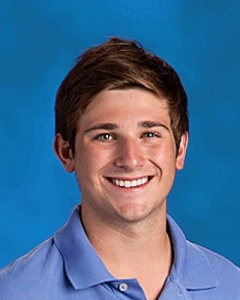 I was friends with students from all over the metro area at school, but never really did anything outside of school or on the weekends with these students. This all changed when Aaron Lang, a friend at school, invited me to play football after school with him in the fall of my sophomore year, to which I hesitantly agreed.

I was very nervous about being the odd man out, playing football with guys who had been friends for several years prior to Rockhurst. We ended up playing football for two whole hours that fall Friday, and by the end of it I felt completely comfortable with that group of guys, so much so that afterward we decided to hang out that night. This game led to many more games throughout the year, which led to many more nights spent with these guys.

As the year continued, I noticed my relationships growing stronger and stronger with these guys as we created teams and played in both CYO basketball and Brookside Soccer. It started to dawn on me that my friendships with these men were formed out of competition and continued to grow because of constant competition. And I don’t think I am alone in this–it seems to be the norm for students here at Rockhurst.

As these friendships mature, the competition that drives them spreads to other aspects of life, like grades at school. While maturing as friends at school, healthy competitions between friends form based on how well each is performing academically. This competitive spirit, when brought to the aspect of academics, fuels students to do the best that they can in their work in order to perform better than their friends. Through this healthy competition, lasting friendships form and grow at Rockhurst.

My friend Thomas Mavec and I have been friends since freshman year, and are extremely competitive when it comes to both sports and grades. We have five of seven classes together and constantly compete to see who can get the better grade on certain assignments, in the class, or overall GPA. This competition has allowed me to study more than I ever have as a junior, earning me a higher GPA than ever before while my friendship with Thomas matures and deepens.

Many friendships formed at school were sparked by competition and continue to grow through competition. The competitive spirit that creates these friendships encompases everything from backyard sports to grades. By forming relationships based on competition, people are truly able to come to know one another while at the same time bettering themselves in the long run both in friendship and personal matters.